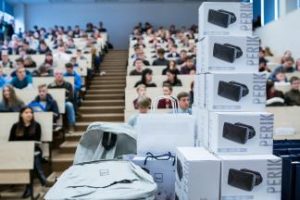 KTU IF has been organising dr. J. P. Kazickas IT contests and forums for schoolchildren since 1998. Every year, these events involve more than 400 students from all over Lithuania. This year, it was the 20th anniversary of the Computer Science Forum already, and the most gifted young IT enthusiasts from schools all over Lithuania competed in contests for programming, IT application, multimedia, and developed programs.

The prizewinners received greetings by Dr J. P. Kazickas’ youngest grandson, Peter Kazickas, who wished for the young IT enthusiasts to keep learning, being energetic, and following their dreams.

More than 170 pupils participated in J. P. Kazickas Computer Science Forum, out of whom 108 were schoolchildren, 27 were senior candidates, who competed in the competition for IT application, 24 were the junior group participants, and there were 11 teams of students, who created multimedia and took part in the competition for developed programs.

The prizewinners of all contests were awarded not only J. P. Kazickas Family Foundation prizes but by other sponsors’ gifts as well. The awards were given to the winners from Kaunas and Kaunas region and other four regions of Lithuania – Aukstaitija, Dzukija, Suvalkija, and Zemaitija.

Since 2015, the programming competition for Kaunas and its region has been supported with a monetary award by Devbridge Group – a company which provides programming services for the USA. The winners of the IT application contest were awarded by Adform, a company which creates online advertising.

The prizes for the 1st and the 2nd place in the multimedia and program development competition were provided by DATA DOG. Other winners also received prizes from an IT company called Blue Bridge.

Seminars for Teachers and Pupils

The Forum also included a 2.5 hours long seminar for teachers, called “Modern virtual learning: methodology and technology”. During the seminar, IT teachers were introduced to modern programming technology learning and project work environments.

We encourage teachers to complete the seminar evaluation questionnaire and share expectations about the next year’s seminar program and format.

Success stories of KTU IT students and to presentations about the game development industry in Lithuania were among the highlights of the seminar part of the event. Pupils were able to see computer games created by Sneaky Box, try robot programming and a device controlled by gaze, and experience rowing, gliding, games in Kaunas forts, etc.  in virtual reality.